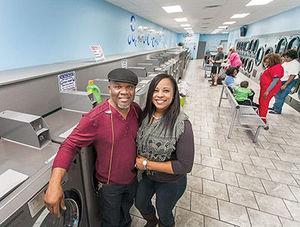 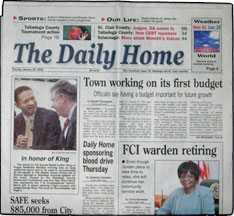 A Pell City couple wanted to start a business that would not only earn them money, but would also help and give back to the people of the community.

“We did a lot of research,” said Billy Blaylock, who along with his wife, Melissa, opened BAM’s at 2102 Cogswell Ave., next to Standard Furniture. “We knew Pell City was in need of a laundromat, so we did some investigations. We considered it for about one year.”

And in late January, the couple dove into the laundromat business.

On their opening day, Jan. 22, they let customers wash their clothes for free and also provided snacks, like free pizza and donuts, Melissa said.

She said they continue to have customer appreciation days on many Saturdays when the couple are free from their normal jobs at Honda Manufacturing of Alabama in Lincoln.

It was their jobs at HMA that brought them to Pell City. Melissa is originally from Alexander City, and Billy is from the Gadsden area.

“I really love our location,” Melissa said. “It is a good, safe, location, and we have great neighbors.”Melissa Blaylock

“We met at Honda,” Melissa said.

Joked Billy, “She kept chasing me.”

Melissa is a process associate at HMA and builds engines. Billy started as a team coordinator and now works in the Quality Control Department.

Melissa said things have gone smoothly at the new business.

“It’s going really better than I expected,” she said. “Right now, we’re just trying to get our name out there.”

She said the new business is perfect for them.

“We enjoy it because we like meeting people,” Billy said. “We have met a lot of new people since we’ve opened.”

BAM’S is open 24 hours a day, seven days a week. The facility has 29 washers and 30 dryers, including to two 80-pound and four 60-pound washers and dryers for comforters and blankets.

BAM’S has two change machines that can accept $1, $5, $10 and $20 bills. Melissa said there is also a vending machine with washing powder, dry sheets and fabric softener.

There are two televisions that people can watch, and free Wi-Fi is available.

The new laundromat has folding tables, laundry carts, and both men’s and women’s restroom facilities. Billy said there is plenty of parking in front of the laundry mat.